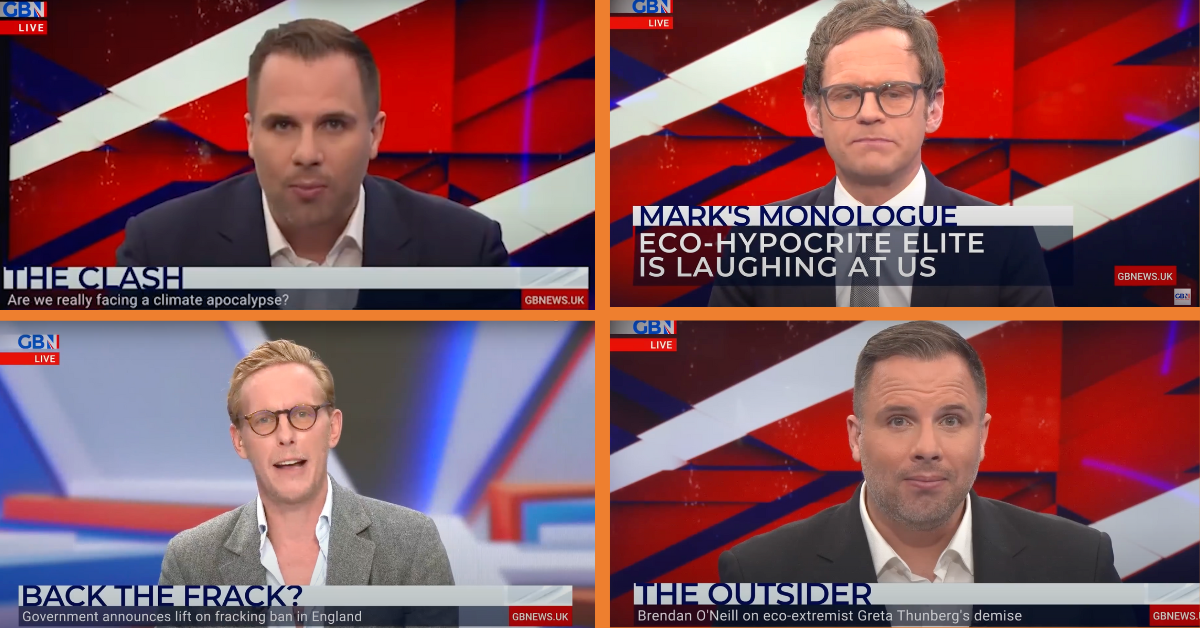 GB News has been described as a “central hub” for climate scepticism in the British media. Since launching in June 2021 the channel has platformed climate deniers and sceptics and aired climate misinformation ranging from outright climate denial to content that seeks to scrap vital climate policies (using the Conservative policy name “Net Zero”), to segments lobbying for more fracking, oil and gas. After being partly funded by Legatum Ventures on launch, GB News is now majority owned by the Dubai-based investment firm.

Legatum has stated that its “predecessor entity, Sovereign Global Investment invested in the shares of Gazprom”, while nonetheless insisting “One is not in cahoots with Putin merely because one owns publicly-listed shares of a Russian company“.

The Legatum Institute, which Legatum also funds, has taken money from the Charles Koch Charitable Foundation, part of the notorious Koch family foundations, whose fortune was built on oil and gas. The Legatum Institute also has ties to the network of free-market think tanks in 55 Tufton Street as well as the US-based Heartland Institute, the latter of which has historically received funds from ExxonMobil in the United States.

Aside from Legatum’s links to fossil fuel funds, GB News is making money every minute from advertisers on YouTube. Big brands – who collectively spend millions advertising their green credentials – will usually have no idea they are appearing next to GB News’s toxic content. However, there is a simple way to stop them.

Here is how we can defund GB News…

We have created a YouTube playlist (embedded below) with some of the most toxic GB News content on climate in the past year. All of these videos contain some kind of misinformation either in the form of outright climate denial or content that seeks to cast doubt, delay or divide.

Alternatively, you can go to GB News’ YouTube channel and search for relevant videos. Go to the “Videos” section and try “Climate” or “Greta”, or whichever climate-related term you care about the most. Chances are, GB News are being paid by brands to spread misinformation about it. 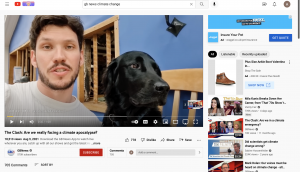 Often, brands are quite taken aback to find out their advertisements are being shown alongside climate misinformation. So it’s our job to let them know! Either tweet at the brand using their handle or send them an email – and a few things to remember:

2️⃣ Include your screenshot in your message

3️⃣ Remember to use our campaign hashtag #DontFundGBNews

Here’s some examples from our followers: 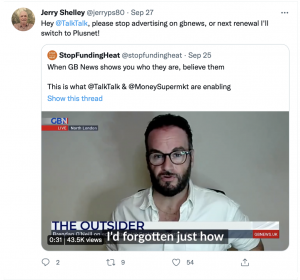 Step 4: Heard back from an advertiser?

Step 5: Encourage others to take part

Now it’s time to share this process and encourage your friends and followers to do the same. Together we can defund GB News and end their campaign of climate misinformation and denial. You can copy and paste the below tweet, and use our campaign image which you can download below

I’ve followed these steps ⬇️ to let the advertisers of GB News know they are funding climate misinformation and denial.

Will you do the same? It’s about time we #StopFundingHeat 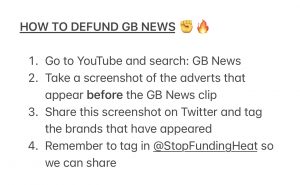