Mark Zuckerberg is on record admitting that sensationalist content and misinformation on Facebook is good business. In 2021, the social media giant continues to be under fire from whistleblowers, the press, governments and advertisers on the spread of misinformation on the platform, opening up a wider debate on Facebook’s impact on society. Facebook claims it is fighting a multitude of issues including hate speech, public health, elections and – lately – climate misinformation.

Stop Funding Heat’s new report, using tools and expertise from the Institute for Strategic Dialogue and CASM Technology, brings fresh evidence to the table, finding that climate misinformation is rampant on Facebook, while the platform directly receives thousands of dollars to place climate misinformation on its advertising platform. 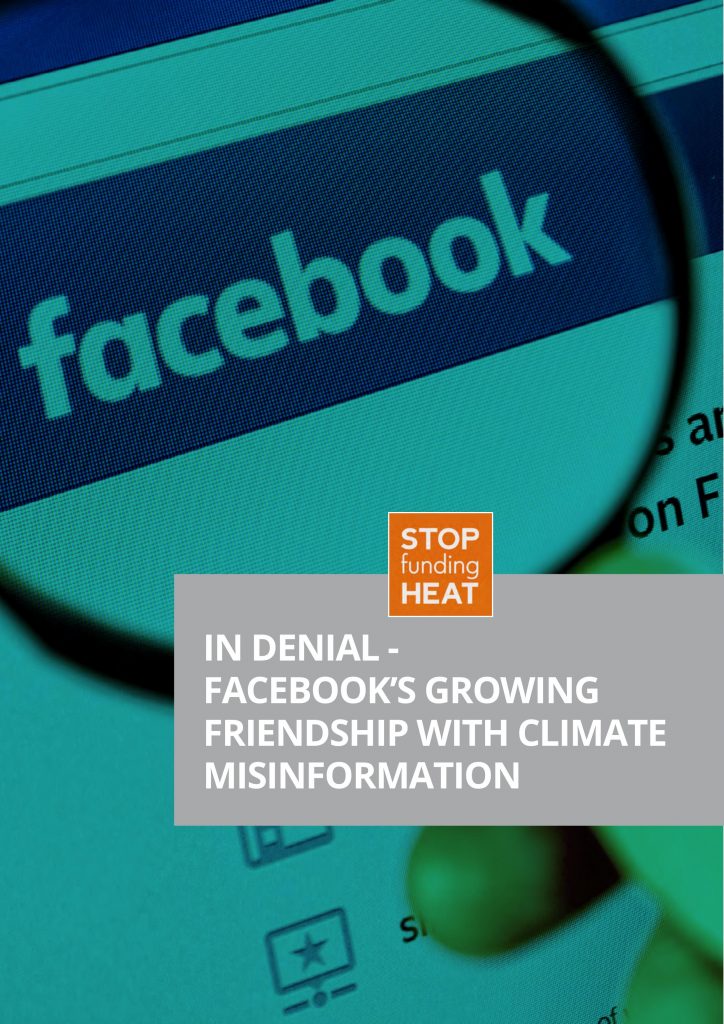 – Up to 13.6 times more views of misinformation than Facebook claims to send to its Climate Science Center. Only 3.6% of the misinformation identified was fact-checked.

– The number of reactions, comments and shares per post from Pages and Groups dedicated to climate misinformation increased 76.7% since the start of the year.

– 113 climate misinformation adverts on Facebook’s Ad Library between January and October 2021. 78% of the estimated spend on these adverts came from 7 Pages that were already flagged one year ago in a previous report. Facebook is yet to act.

This is Stop Funding Heat’s second report in six months covering Facebook’s problems with climate misinformation. May 2021’s “On The Back Burner” report explored over 150 academic studies, reports and journalistic articles that exposed loopholes in Facebook’s misinformation policies and provided concrete examples demonstrating the extent of the problem.

In this report, Stop Funding Heat brings fresh evidence to Facebook. With a dataset of 195 accounts and 48,700 posts, the report finds an average range of between 818,000 and 1.36 million views of climate misinformation every day. Just 3.6% of this content has been fact-checked. This report also finds that Facebook continues to directly receive thousands of dollars while placing climate misinformation on its advertising platform. This issue in particular has an easy fix, was raised over a year ago, and yet nothing has been done.

Part 1, “Introduction”, provides context for this report, including background on definitions, on other relevant reports, and why Facebook needs to take swift action now before it is too late.

Part 2 also provides a large sample of the climate misinformation posts found throughout this research in order to demonstrate just how wide-reaching and multifaceted this problem truly is. It also makes the methodology – and the science behind it – transparent.

Part 3, “Climate Misinformation on the Advertising Platform”, presents 113 climate misinformation adverts that Facebook have received money for in 2021. Seven of the Pages surfaced a year ago but have continued to advertise without intervention from Facebook. This represents a huge vulnerability ahead of COP26 – anyone could start a Facebook Page and start paying to spread lies about the climate overnight without intervention from the platform.

Part 4, “What Can Be Done?”, covers what Facebook should do next. This part is very brief because the next steps, at their core, are very simple – (i) adopt a public definition of climate misinformation; (ii) enforce it; and (iii) be transparent about progress.

COP26 is the most important global climate summit yet – and the stakes on climate change are only going to get higher. Facebook has reacted too late too many times before – with Q-Anon, with Cambridge Analytica, with Covid-19, even with genocide. Facebook is late yet again, and its inaction continues to fuel the climate crisis.

The best time to act on this was years ago. The second best time is now.

We are asking Facebook to show us, not tell us how much they care about climate misinformation with the following actions.