On The Back Burner: How Facebook’s Inaction on Misinformation is Fuelling the Climate Crisis

Facebook has a problem with misinformation – its executives are on record admitting so. Over the years, headlines have focused on Facebook’s role in helping to undermine democratic elections, amplifying hate speech and spreading public health misinformation during a global pandemic. 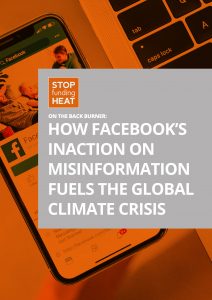 Less has been written on Facebook’s contribution to climate misinformation – but the topic is no less important. For the first time ever, we have taken the time to pull together all of the evidence – and it doesn’t look good. We have found that Facebook is systematically failing on all fronts.

There is no mention of climate misinformation across any of Facebook’s public policies. Worse still, multiple empirical studies have found the social media giant fails to effectively implement the misinformation policies it does have. Several journalistic investigations have exposed multiple loopholes in Facebook’s Third-Party Fact-Checking Program, including climate denial content that has been left to go viral. Finally, Facebook’s latest proposed solution to tackle the problem – the Climate Science Information Center – fundamentally fails to tackle the problem of misinformation, as its theory of change does not follow sound climate communication science.

With COP26 imminent – the most important global meeting on climate change for over half a decade – the largest social media company on the planet is showing no signs of correctly addressing this crucial problem. Our report outlines the extent of the issues, but just as importantly, makes recommendations to fix this issue as quickly as possible.